You are here:  Elegant Simplicity > Discography > Other Releases > Other Voices: Time To Fly EP (1990) 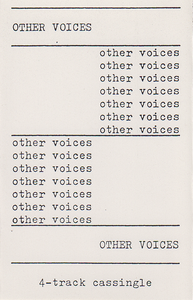 This was the prototype version of Elegant Simplicity, in that it was a release made up entirely of instrumentals. This was the only material released under the Other Voices name. The songs gained a good response, but were let down by poor presentation and primitive recording quality.

Drum parts were played by hand – no sequencer here! The artwork (if that’s the correct word for it!) was created using pre-cut cassette inlay cards and typed on using an old typewriter. No computer in those days.

One song (Mood #1) was re-recorded and released on the Natural Instinct (1994) album. Even though the cover is exceedingly poor, we’re not ashamed to display it!