Architect of Light – The Rescue Mission

So, way back in 2002 we released the concept album Architect of Light. It quickly sold out and has never been commercially available since then; though it has been available as a download at the usual places except Bandcamp.

Anyway, demand for this album has remained high but I have steadfastly resisted a re-release. The main reason being that – as good as the original album was – I was never 100℅ happy with it once it had been released. In terms of performances and songs, no problems. It was the production: my main gripe being the top end sizzle on the cymbals and the ever so slightly muddy mix.

At the time, of course, I thought it sounded terrific! One loves all one’s children, as they say!

Times change, technology marches on and I decided, late 2013, that one of my tasks for 2014 would be to remix and remaster the album: there would be no re-recording, though, as I was always happy with the parts laid down.

As the remix/remastering process was likely to be time consuming and fraught with difficulties, I thought it would make an interesting post . . . so here it is!

Back in 2002, I was recording all the live parts using a Roland VS2480 24 track hard disk recorder, synchronised to Cubase 4 (which drove the MIDI side of things); notably, my Korg Prophecy synth! Once all recordings had been completed, everything would be loaded into Cubase for the mixing sessions. 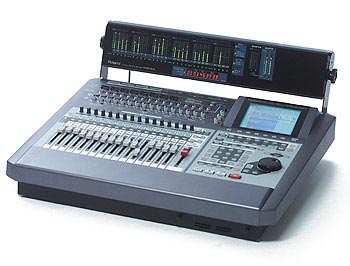 So, the first job was to get the audio files out of Cubase. The problem, of course, is that I use REAPER exclusively nowadays and my copy of Cubase is version 4 and has not been used since may 2004/5.

Should I attempt to install Cubase 4 on Windows 8? Should I upgrade to version 7.5? Nah! As I still have my Cubase dongle, I downloaded the demo of version 7.5 and used that instead. I always had trouble installing Cubase 4 and didn’t really want any grief out of it as the copy protection used to drive me nuts with its erratic behavior.

Anyway, the demo of version 7.5 installed and authorised without a hitch, which was a pleasant surprise. Obviously, to use the blasted program, I have to have the dongle plugged into the PC. Incidentally, if I hadn’t already owned a dongle, I would have had to buy one at £25.00 just to run a ‘free’ demo! Outrageous.

I keep all my projects in carefully organised folders, so I located the Architect of Light folder and the first song Time To Breathe. Or, more precisely Time To Breathe.cpr

So, I double clicked the file and it began opening in Cubase. After telling me about a missing soundcard and having to set it up to use my M-Audio device instead, it opened without mishap.

Before I did anything else, I took screenshots of the track window and the mixer windows so a that I had a reference to panning and relative volume levels. 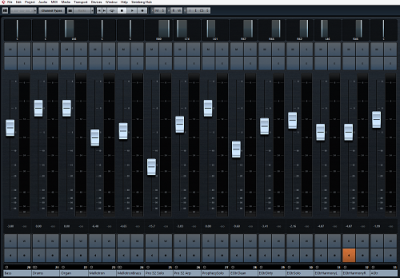 Even in the latest version of Cubase, there is still no export all tracks to stem function . . . . it has be be one track at a time. In REAPER, of course, you can export as many tracks as you want with no such limitation.

So, I sat there for several decades and laboriously exported all the tracks – one at a time – to a new folder. Once done, I closed down the program and killed off the extraneous folders and .csh files Cubase seems to create in this version.

Part 4: Putting it all Together

Now that I had stems of all the tracks, I created a new Reaper project and imported them onto the timeline, each item on a new track at position 0.

I then fired up my Cubase mixer screen shot and set the Reaper mixer up with the same pan and relative volume levels. You know what, the song sounded great as it was. In other words, the basic song was fine. So the next step was to apply effects and rebalance the song – taking into account the issue with the cymbals and the original relative levels.

So, it looks as if the remastering/remix of this long out of print album was going to be way easier than I had anticipated.

As of right now, I have all the songs rendered out and into Reaper projects. The next stage is to allocate a week or so to the mixing and creation of a new production master. After that, check that the artwork is all good to go then send the lot off to the CD pressing plant.

Now all I have to do is find a spare week!

Well, who would have thought it? After, seemingly, centuries of having to have a dongle to run Wavelab and Cubase,…